There are two types of Vegas when it comes to luxury hotels. Large hotel-casinos such as Wynn and Bellagio or smaller hotels in hotel-type properties such as Four Seasons, Delano and Crockfords (at Resorts World). Nomad is one of those types of boutique properties where it’s attached to a hotel-casino but is a stand-alone hotel with separate facilities, but you also have access to Park MGM if you wish. If you don’t like crowds or queues or spending 15 minutes in a huge casino to get to your room, this is the hotel for you. It’s also part of MGM, so if you’re a gamer, you can still get your comps to play MGM.

One of the best things about NoMad is its location which is quite central on the Strip. It is next to the Park MGM, a fairly recently renovated 4* hotel. The NoMad is directly connected to Park MGM.

Inside Park MGM you can access the tram to Crystals shopping and Bellagio. You can also cut very quickly towards Aria, without leaving the comfort of the air conditioning! If you walk the other way you get to New York, New York where you can cross the bridge to Excalibur to take the tram to Mandalay Bay.

If you’re planning on catching a concert, it’s right next to T-Mobile and Dolby Live venues.

I was upgraded from an Atelier room to a large suite and found the check-in staff to be very helpful. I was also impressed with the bellboy, who was not at all worried about a tip as I had no cash, having just come from the airport. This is a big contrast to some other hotels, including the Bellagio where they brazenly ask for tips which I find very rude. He was very chatty and gave me lots of tips for my stay as well as a quick tour of what was in the room. 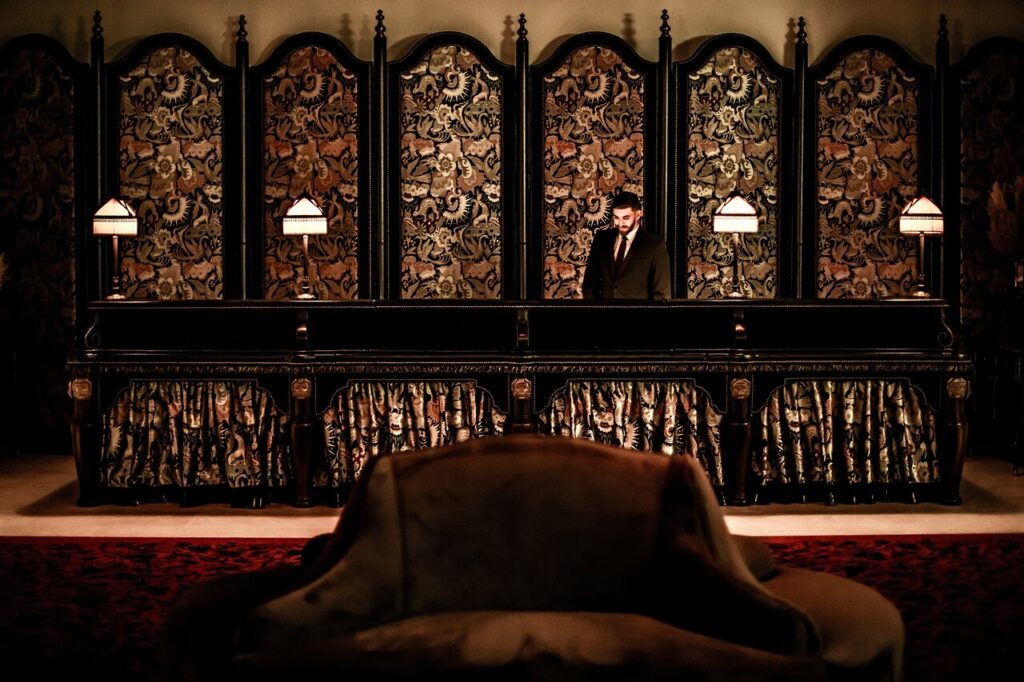 The hotel was quiet when I arrived, partly because it was quite late and partly because it’s still small. It was very exclusive and friendly, whereas in many big hotels you can feel like a number. 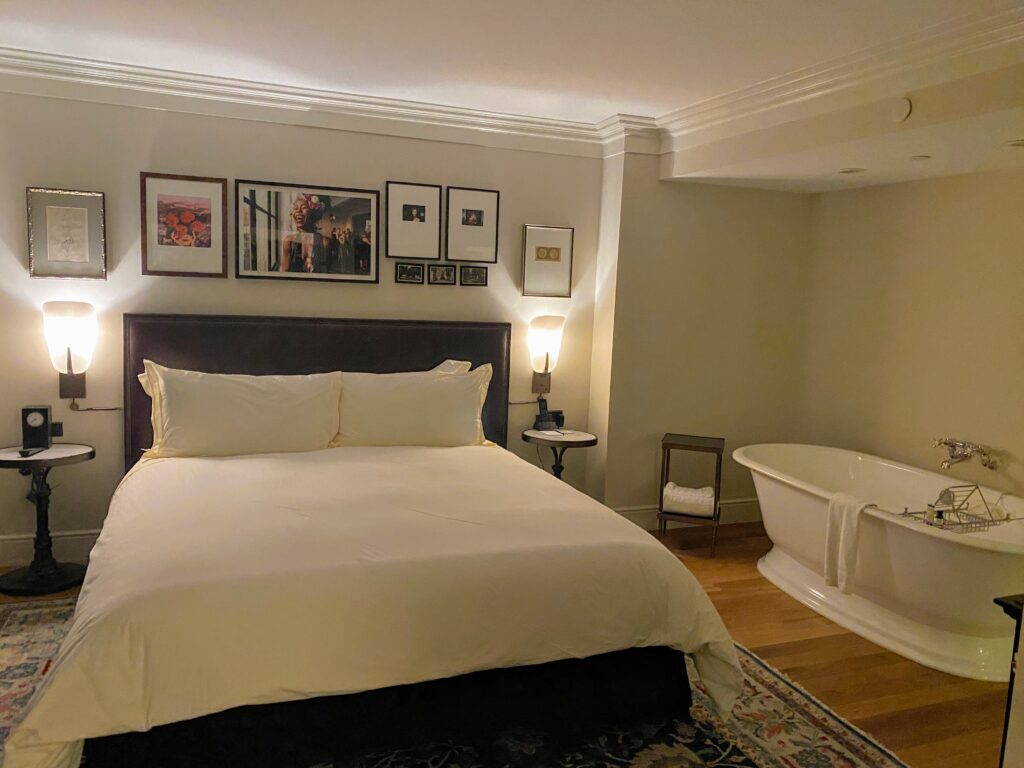 The whole hotel is quite dark and dramatic inside, but that’s the signature look of NoMad hotels. Both modern and classic, their decor is very distinctive. 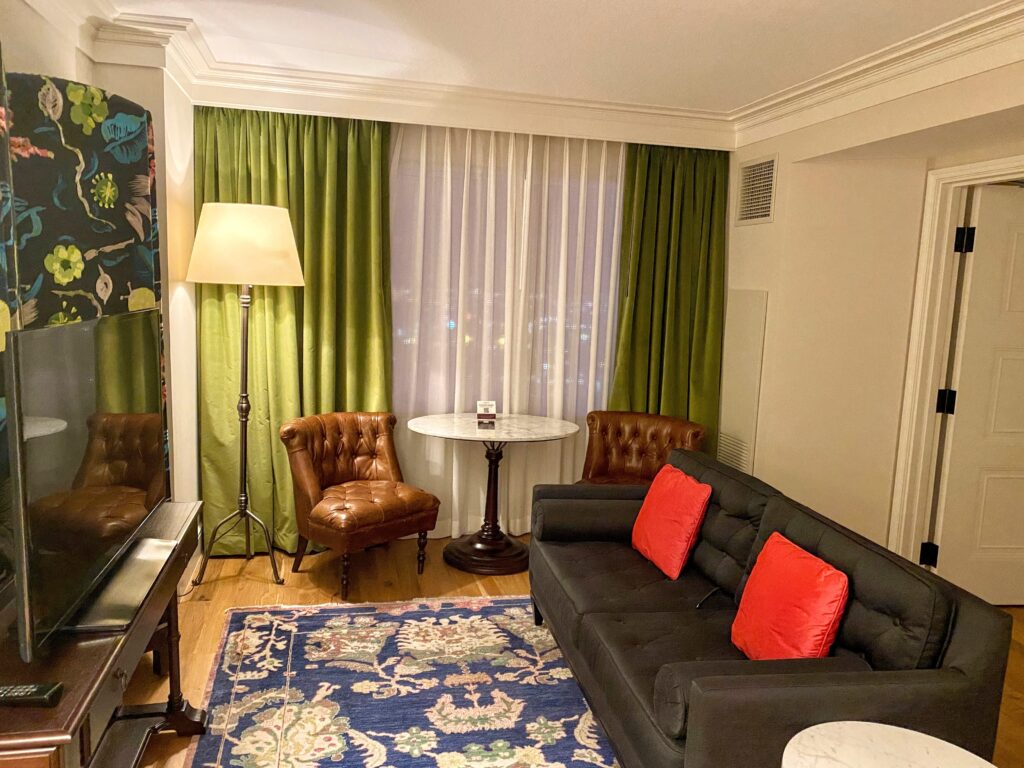 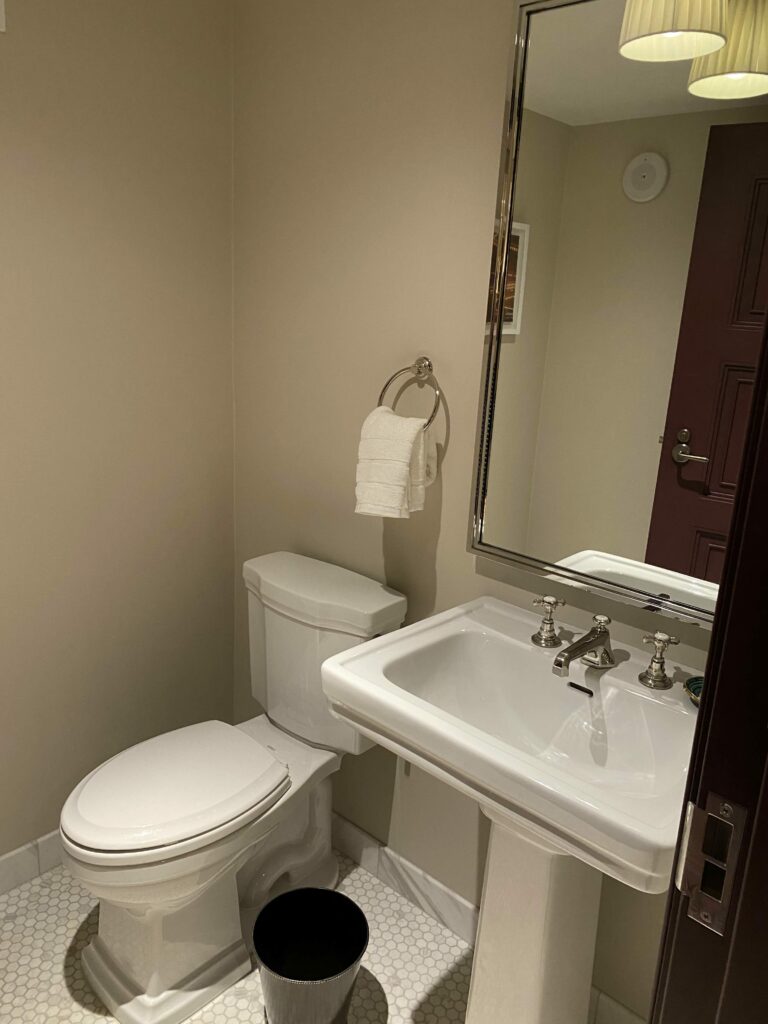 When I arrived at the end of April, room service closed quite early around 9pm and when I tried to call about 10 minutes before, they didn’t pick up. It was a bit unnerving when you arrive from a late flight, and the last thing you want to do is go out. 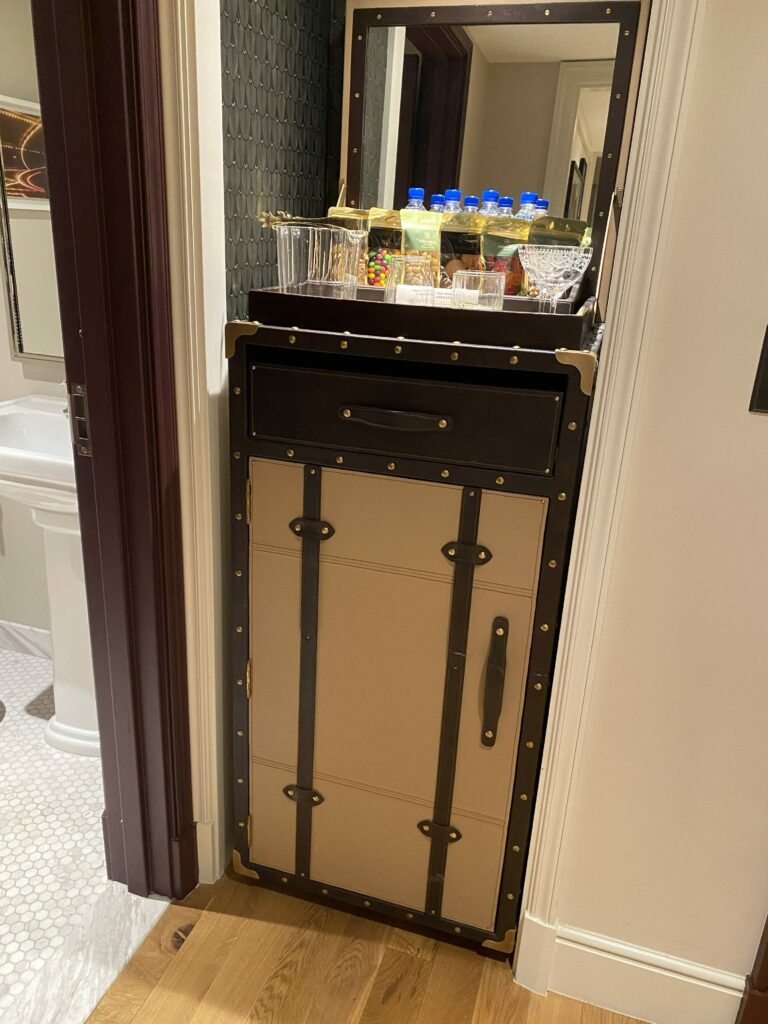 The minibar was in the living room above what looked like a safe which I loved the look of. This also housed the safe, which was odd as usual it would be with the wardrobe. There was no tea or coffee making facilities in the room, which is standard for Vegas, but some boutique hotels like the Four Seasons have them. It’s basically a ploy to get you out of the room by spending money.

In the bedroom, there was a super comfortable King size bed with custom Bellino linens. The room was also very quiet, which is somewhat unusual in Las Vegas. I liked the lounge chair, which was the perfect size to have your suitcase on if you didn’t want to completely unpack.

The freestanding freestanding bath in the bedroom was also unusual. I’m not always a fan of these, as you often end up with wet ground. To be fair, it was a great sized tub, perfect for soaking those tired Vegas feet, and you could watch TV at the same time. 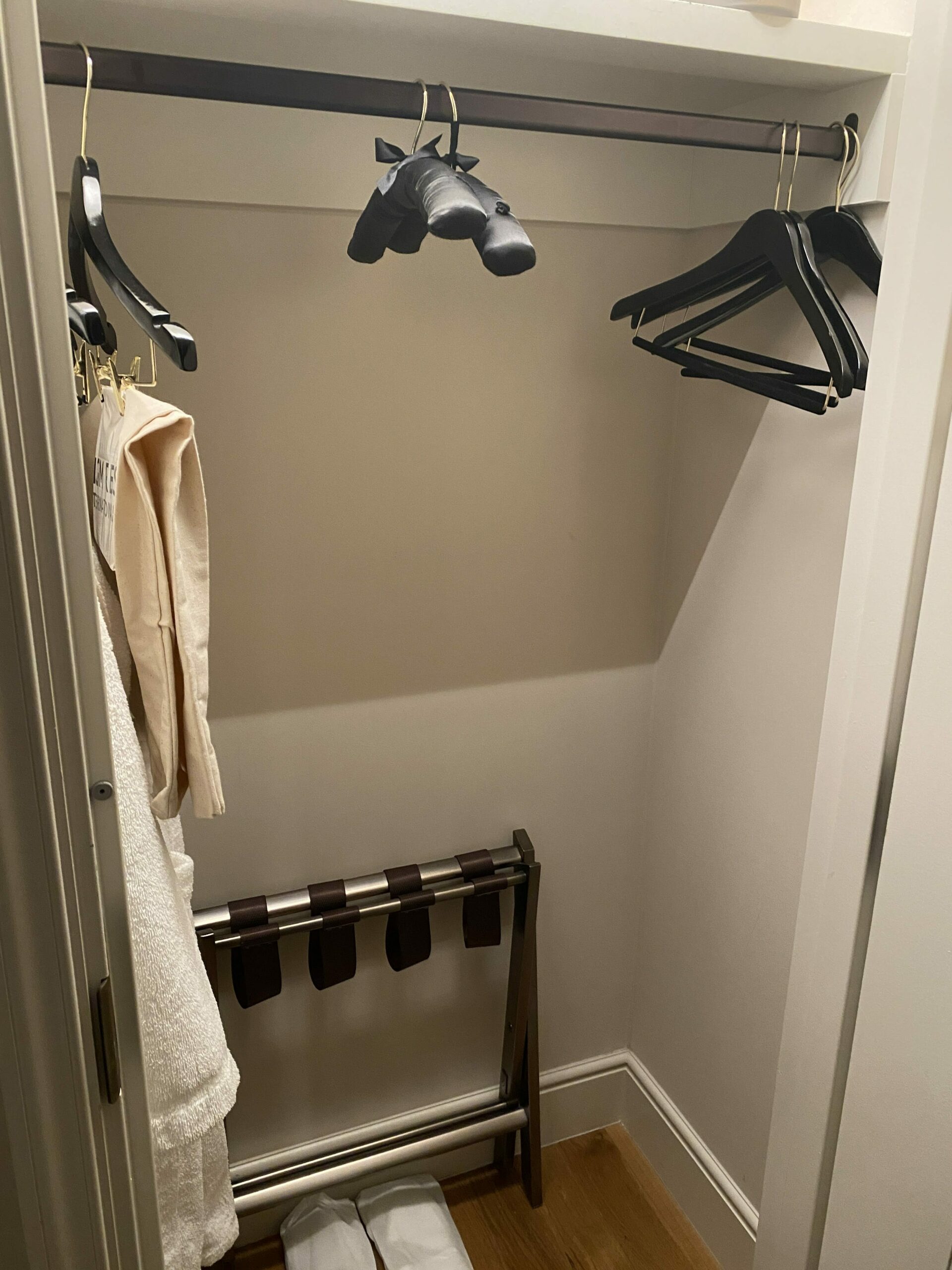 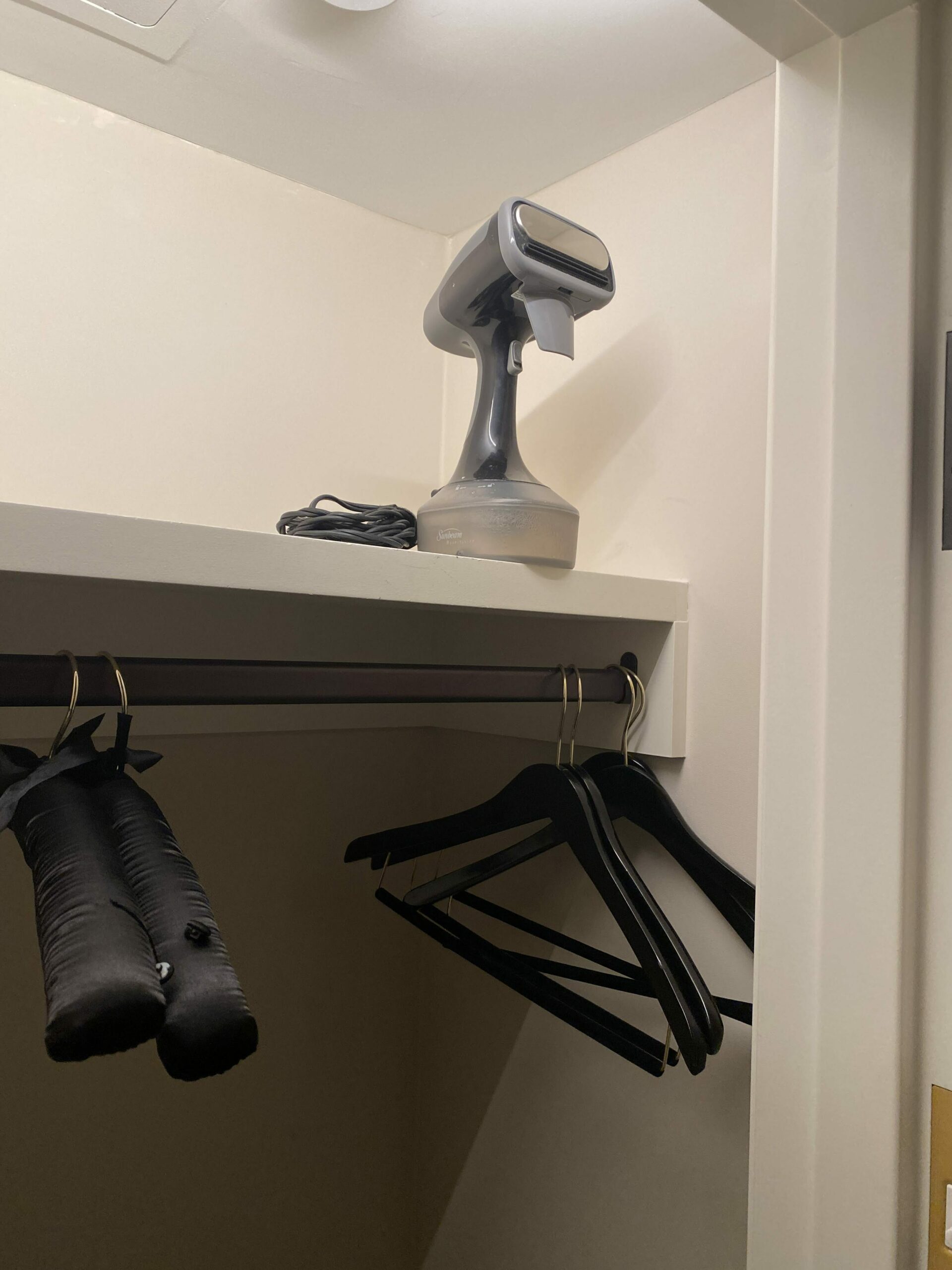 The wardrobe was also in the bedroom and had a steamer rather than an iron and ironing board. It seems to be a growing trend in Vegas and I think it’s convenient. For starters, most hotel irons are useless and usually dribble all over your clothes. Typically, your clothes need a quick refresh to get wrinkles out, so a steamer is easier and faster than ironing in most cases. The bathrobe is also a bespoke design from Bellino. 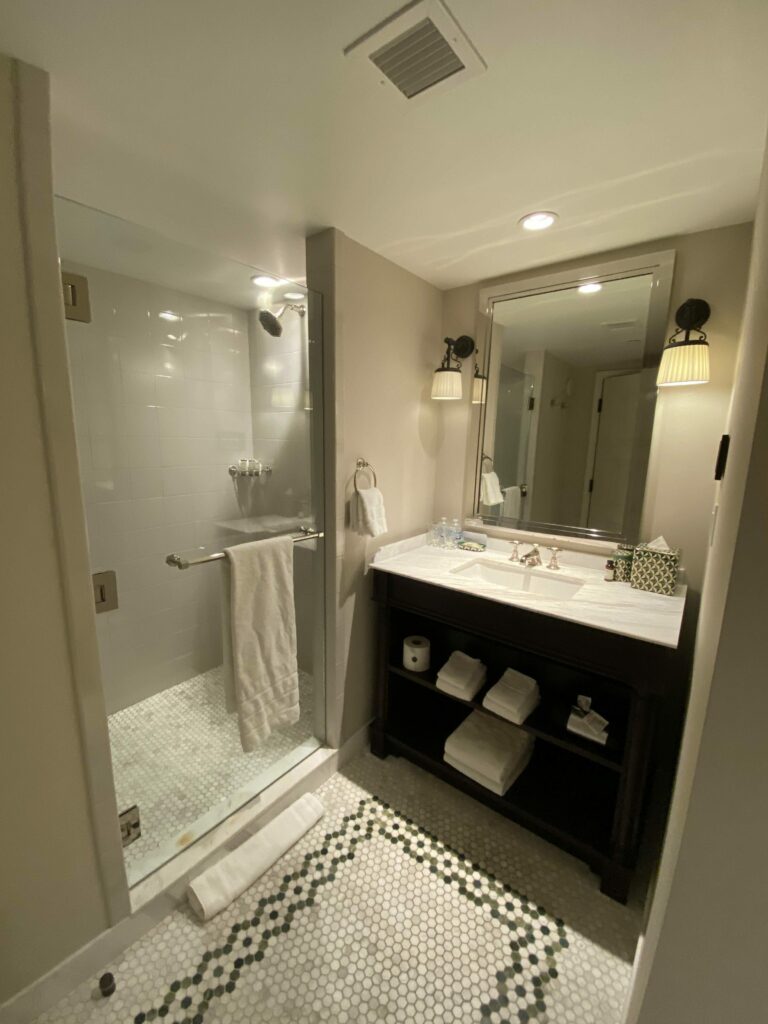 The proper bathroom was next to the bedroom and had a walk-in shower with Carrara marble mosaic tiles. I liked the separate vanity in the bathroom, although I would have liked a magnifying mirror here. It was great that there was a stool to sit on while you get ready if, like me, you like to glam at a leisurely pace on vacation! 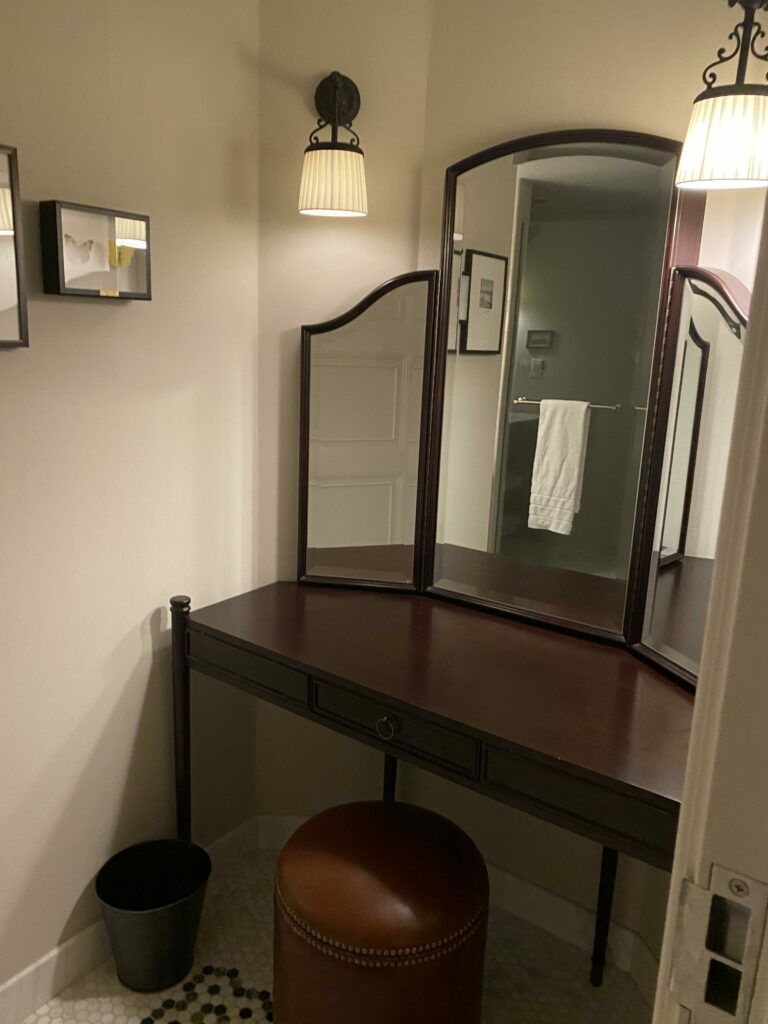 Toiletries are now specially made by Côté Bastide, a brand that aims to recreate the ambiance of living in the south of France. However, when I was there it was Argan toiletries which I found very good with the dry Vegas atmosphere. 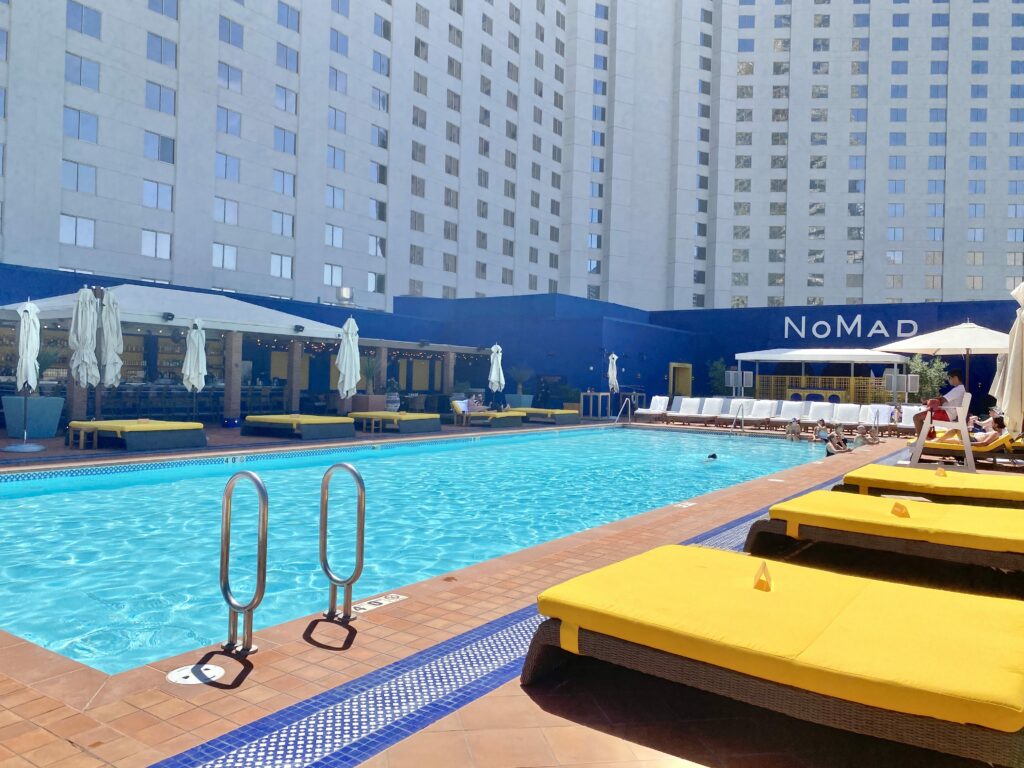 There are only a few facilities at NoMad, but then you have the whole MGM park and the Strip to explore. You can also cross-charge between MGM properties, which is handy.

There’s a small 24/7 gym, but the highlight is the pool. Often Vegas pools can get very crowded and way too partyy for me. The NoMad pool has the best of both worlds with a sophisticated feel but a more exclusive atmosphere. The pool is in the shade until around noon when I visited in the spring, which meant it was a bit chilly until the sun moved, but that wouldn’t be a problem in the summer. 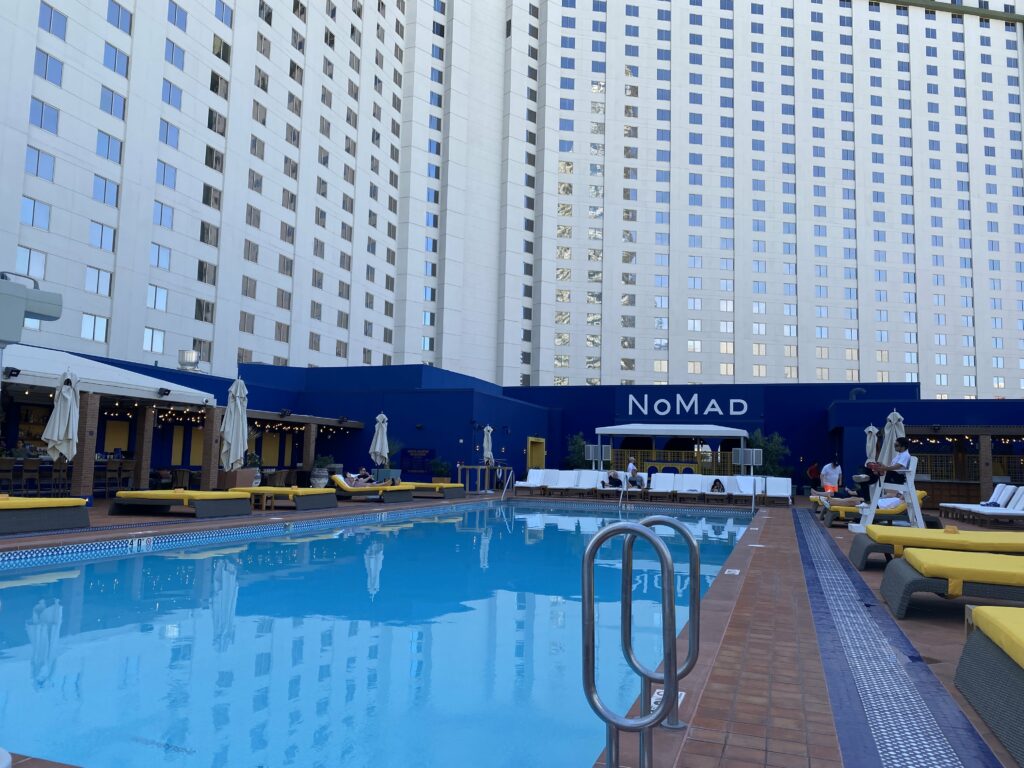 Morning at the pool

Service was good by the pool with decent food and drink menu. I found the servers quite attentive, but it was also easy to get to the bar to order. 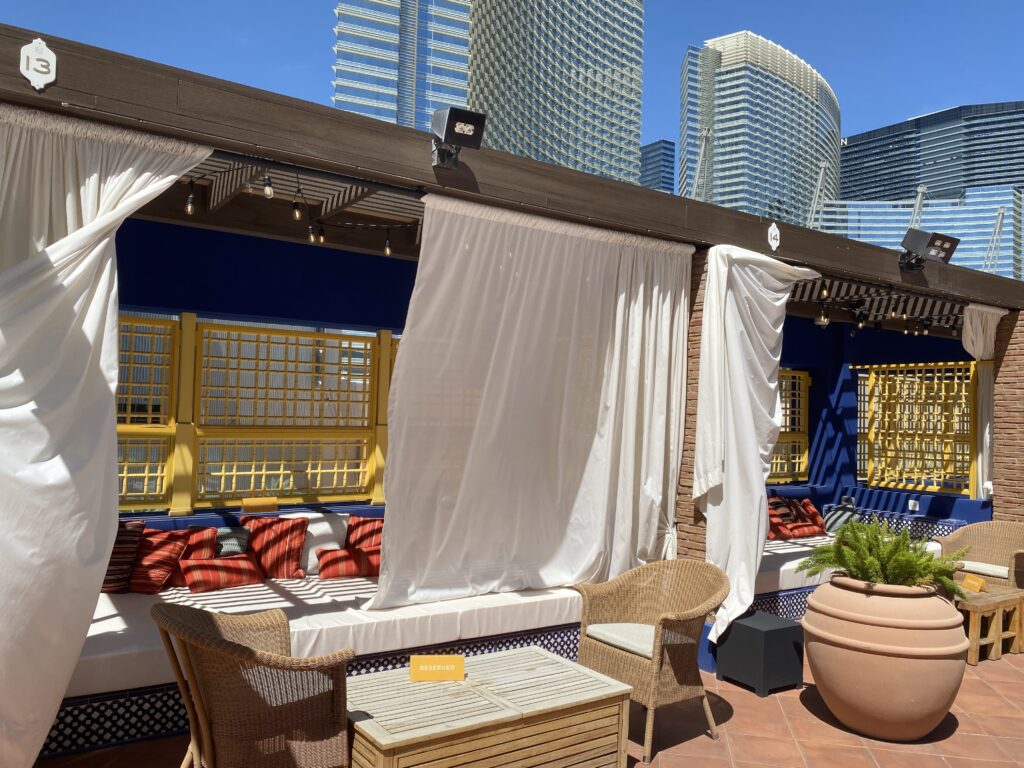 The decor was quite Mediterranean or Moorish with the tiles and the day beds. As usual with most Vegas hotels, there was no shade unless you paid for it. 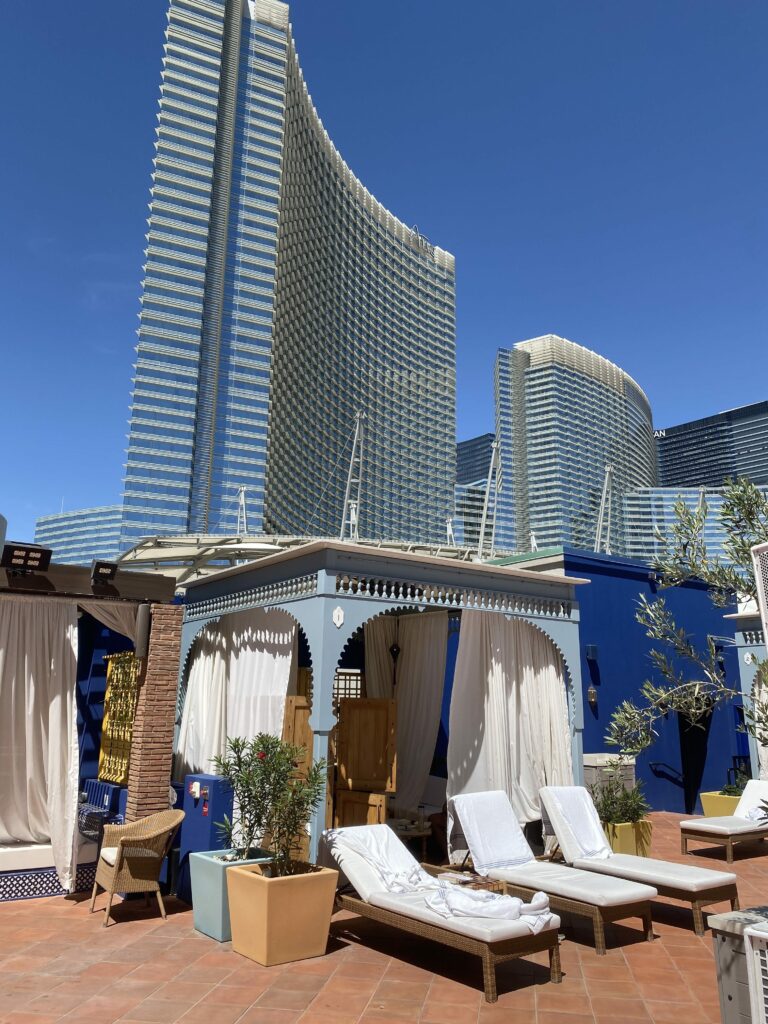 The large hot tub was incredibly hot, so much so that I could only stand for a few minutes at a time which was a shame.

There is the Nomad Library Restaurant and Bar within the Nomad Hotel, but if you want to have breakfast you will have to venture into Park MGM. However, there are so many great places to have breakfast in Las Vegas that I’m never too worried about the hotel restaurant. If you wanted to eat near Nomad, there is an upscale breakfast place called Primrose, which is very close to the NoMad entrance in Park MGM. 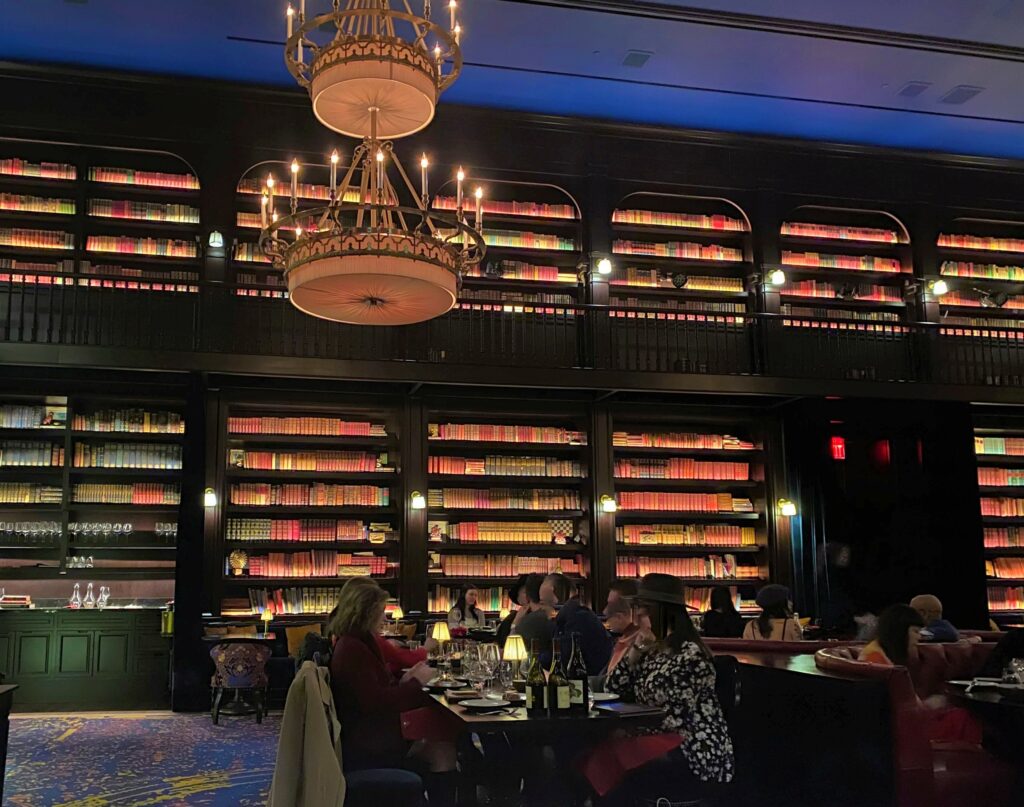 I’ve eaten at The Library before so didn’t venture there on this trip. However, it is probably one of the most beautiful restaurant interiors in Vegas – dark, dramatic and romantic. The food was also excellent. 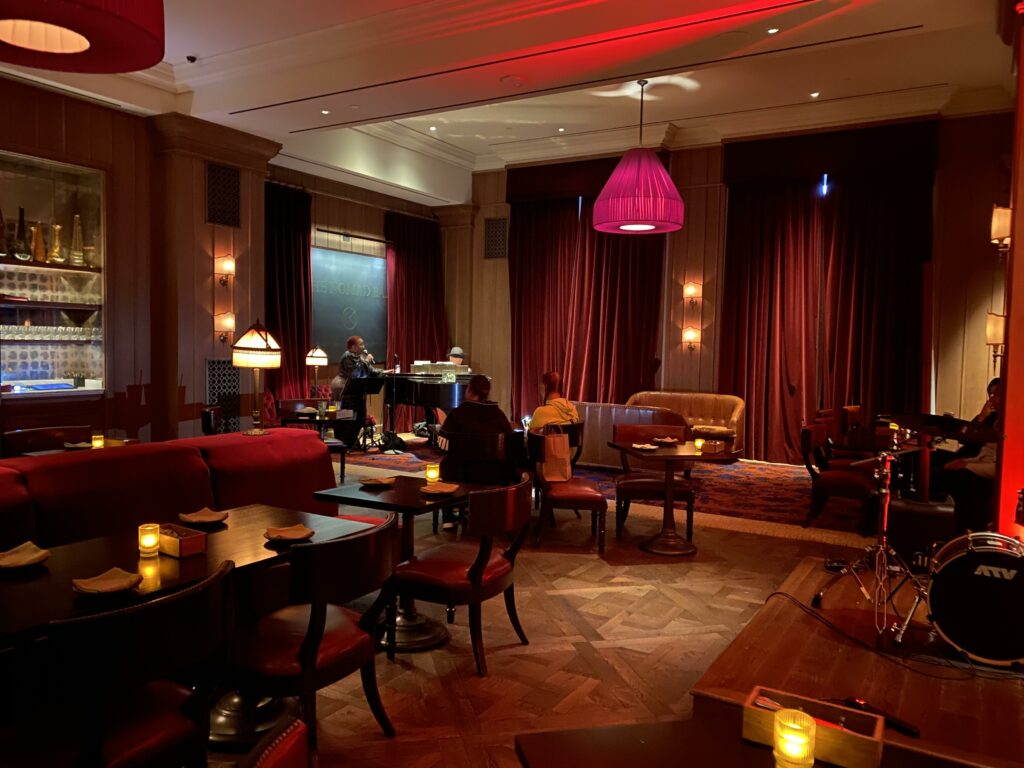 I’m also a big fan of the library bar if you want something a little quieter and more sophisticated. They often have live music, which adds to the laid back vibe, and some great cocktails too. There is also an outdoor terrace here.

Booking and how to get the best deal

I booked through MGM directly through the MGM Rewards loyalty program. If you have Hyatt status, you should match with MGM before booking. I matched Gold in MGM from Explorist, so I got a nice sequel upgrade.

The main benefits of Gold when booking are:

I always find them the cheapest rates when I book. However, it’s still worth comparing with what our luxury travel agent partners GTC offer, especially if you don’t have MGM status. With GTC you get:

I really enjoyed my stay here. It’s not as fancy as the Four Seasons (my favorite Vegas hotel) and you don’t get all the bells and whistles with NoMad’s service like you do there. However, it has a better location with the advantages of a small hotel. I appreciated the upgrade which the Four Seasons are quite weak on (usually a better view but the same room).

Prices start at around £200 in low demand with the Four Seasons starting at £228 and the Crockfords at £212.